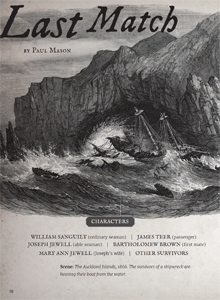 In 1866, the General Grant was sailing from Australia to London when it was shipwrecked on the one of the Subantarctic Islands. Of the eighty-three people on board, only fifteen made it ashore. A survivor later wrote about how the castaways only had six matches, with five "squandered". The lighting of the last match was a critical moment in their survival.