The Story of the Ventnor 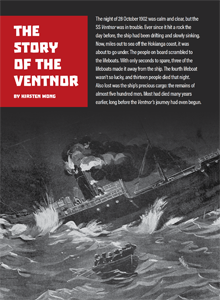 In 1902, thirteen lives were lost when the SS Ventnor sank off the Hokianga coast in Northland. The ship was carrying the carefully packaged bones of almost five hundred Chinese goldminers on their way home for burial. Despite immediate efforts to retrieve the bones, the ship and its precious cargo were lost. Over the following months, some of the bones washed up on Hokianga beaches. Most of these bones were collected and cared for by local iwi, with the stories of the shipwreck and the Chinese kōiwi passed down across generations of Māori. Over one hundred years later, some of the decendants of the goldminers discovered the fate of the bones and the kindness that iwi had shown and travelled north to learn more. A shared respect for the ancestors has since drawn together Chinese New Zealand communities and the iwi who are now kaitiaki of the goldminers’ remains.