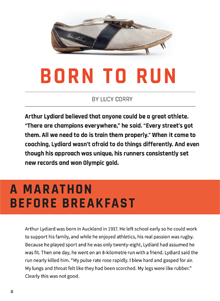 Arthur Lydiard was a New Zealand runner and athletics coach whose approach to training has left a lasting impact on the sporting world. Using speed and endurance-building techniques that he developed through trial and error, Lydiard coached several high-performance runners to Olympic success. A firm believer that anyone could be a champion, Lydiard played an important role in popularising jogging in Aotearoa New Zealand and internationally. “Born to Run” includes a profile of Lilly Taulelei, a year 10 student who has played for the New Zealand basketball team. She was also selected for an Asia-Pacific basketball team that played at the Global Championships in 2019. She shares her thoughts about what makes a good coach.