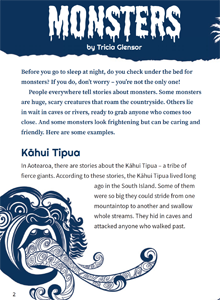 This article describes a selection of mythical creatures and monsters from around the world, including Kāhui Tipua (Aotearoa), Afinemata/Gāhehelevao (Tokelau), kraken (Norway), oni (Japan), sphinx (Ancient Greece and North Africa), dragons (Asia and Europe), chinthe (Myanmar/Cambodia/Laos), and the bunyip (Australia), and discusses the possible origins of such creatures and some of the reasons for their universal appeal.