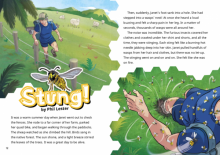 When Janet set out to check the fences on her remote sheep farm in Taumaranui, she had no idea that her life would soon be in danger. Based on a real event, “Stung!” recounts what happened when Janet stepped on a wasps’ nest and was attacked by a swarm of angry insects. With no cellphone reception and no one there to help, Janet’s survival depended on incredible stamina and determination. Not surprisingly, the after-effects of the attack have been long lasting.