The Story of Taranaki 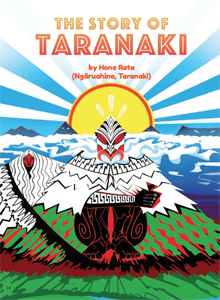 This traditional story, known by many iwi in the Taranaki area, tells how Mount Taranaki was once called Pukeonaki and stood in the centre of the North Island, close to Mount Tongariro. The two mountains fought over Pihanga, a nearby mountain. Tongariro won and Pukeonaki left in anger and grief, travelling to his present position and forming the Whanganui River on the way. The people who came to live in the region later named him Taranaki.