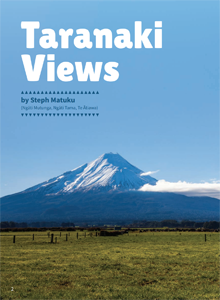 “Taranaki Views” is a lengthy article that offers a range of perspectives on Taranaki Mounga. (“Mounga” is a Taranaki iwi pronunciation and spelling; it’s spelt “maunga” by most other iwi.) The text is written in two parts, the first presenting historical and geographical information about the mounga and incorporating the views of scientists and mana whenua. The second part is based on interviews with local people and focuses on what the mounga means to them.

The Story of Taranaki

This traditional story, known by many iwi in the Taranaki area, tells how Mount Taranaki was once called Pukeonaki and stood in the centre of the North Island, close to Mount Tongariro. The two mountains fought over Pihanga, a nearby mountain. Tongariro won and Pukeonaki left in anger and grief, travelling to his present position and forming the Whanganui River on the way. The people who came to live in the region later named him Taranaki. 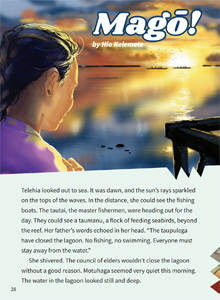 This is a humorous, entertaining story based on a true event. It provides examples of characterisation and dialogue as well as being a model for imaginative writing. This is a Pacific text. It provides a chance for Tokelauan and other Pacific students to see themselves and their culture reflected in the Journal. 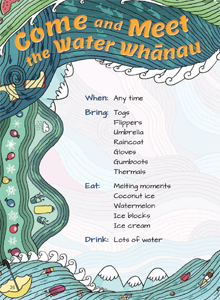 Come and Meet the Water Whānau

This poem links to “Our Blue Planet” in SJ L2 Nov 2019, showing how a topic can be approached in various ways in different genres. The poem takes the form of an invitation, with a series of headings and lists of single words or two words relating to those headings.