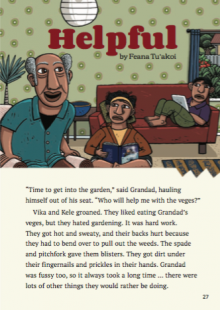 Grandad wants Vika and Kele to help him in the garden, but they don’t share his enthusiasm. Vika manages to come up with an excuse, leaving Kele with all the work, but then the tables are turned and Vika becomes the one who has to help Grandad. The humour in this story arises from the contrast between Vika’s attempts to get out of helping, Dad’s determination to make sure she does her fair share, and Grandad’s lack of awareness that anything is going on. These characters also appear in “Kele’s Car” (Gold 2) in JJ 49.