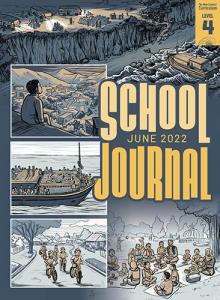 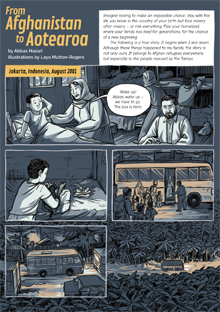 From Afghanistan to Aotearoa

Imagine having to make an impossible choice: stay with the life you know in the country of your birth but face misery after misery – or risk everything. Flee your homeland, where your family has lived for generations, for the chance of a new beginning. The following is a true story. It begins when I was seven. Although these things happened to my family, the story is not only ours. It belongs to Afghan refugees everywhere, but especially to the people rescued by the Tampa. 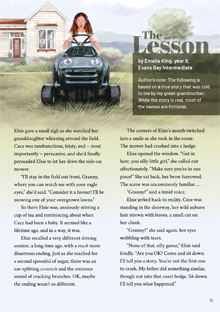 Author’s note: The following is based on a true story that was told to me by my great-grandmother. While the story is real, most of the names are fictional.

Elsie gave a small sigh as she watched her granddaughter whizzing around the field. Cece was rambunctious, feisty, and – most importantly – persuasive, and she’d finally persuaded Elsie to let her drive the ride-on mower. 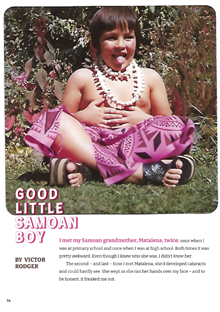 I met my Samoan grandmother, Matalena, twice: once when I was at primary school and once when I was at high school. Both times it was pretty awkward. Even though I knew who she was, I didn’t know her. The second – and last – time I met Matalena, she’d developed cataracts and could hardly see. She wept as she ran her hands over my face – and to be honest, it freaked me out. 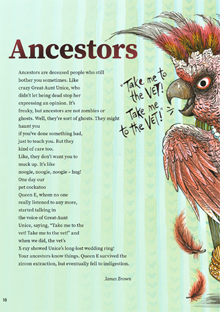 Ancestors are deceased people who still bother you sometimes. Like crazy Great-Aunt Unice, who didn’t let being dead stop her expressing an opinion. It’s freaky, but ancestors are not zombies or ghosts. Well, they’re sort of ghosts. They might haunt you if you’ve done something bad, just to teach you. But they kind of care too. 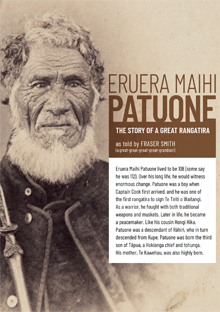 Eruera Maihi Patuone lived to be 108 (some say he was 112). Over his long life, he would witness enormous change. Patuone was a boy when Captain Cook first arrived, and he was one of the first rangatira to sign Te Tiriti o Waitangi. As a warrior, he fought with both traditional weapons and muskets. Later in life, he became a peacemaker. Like his cousin Hongi Hika, Patuone was a descendant of Rāhiri, who in turn descended from Kupe. 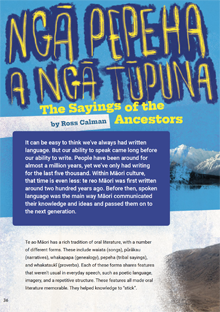 It can be easy to think we’ve always had written language. But our ability to speak came long before our ability to write. People have been around for almost a million years, yet we’ve only had writing for the last five thousand. Within Māori culture, that time is even less: te reo Māori was first written around two hundred years ago. Before then, spoken language was the main way Māori communicated their knowledge and ideas and passed them on to the next generation. 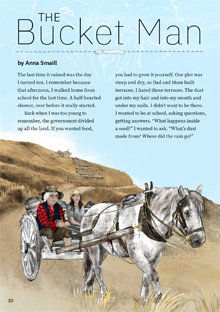 The last time it rained was the day I turned ten. I remember because that afternoon, I walked home from school for the last time. A half-hearted shower, over before it really started. Back when I was too young to remember, the government divided up all the land. If you wanted food, you had to grow it yourself. Our plot was steep and dry, so Dad and Mum built terraces. 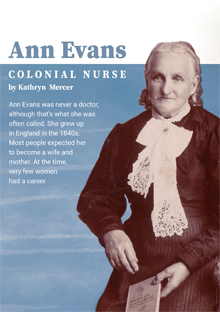 Ann Evans was never a doctor, although that’s what she was often called. She grew up in England in the 1840s. Most people expected her to become a wife and mother. At the time, very few women had a career.