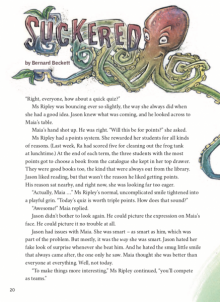 "Jason had issues with Maia. She was smart – as smart as him, which was part of the problem. But mostly, it was the way she was smart. Jason hated her fake look of surprise whenever she beat him. And he hated the smug little smile that always came after, the one only he saw. Maia thought she was better than everyone at everything. Well, not today."