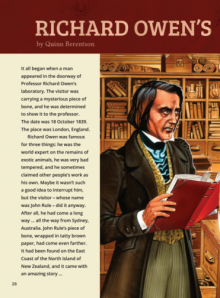 Richard Owen was a British scientist of the early nineteenth century, most famous for his identification and naming of dinosaurs. This article reports on the role he played in unravelling the mystery of the moa and in identifying it as the largest bird ever known to humans. The nature of scientific endeavour is conveyed well, from the initial presentation of a bone fragment and through the research needed to have a new species recognised.