My Name Is Davy Lowston 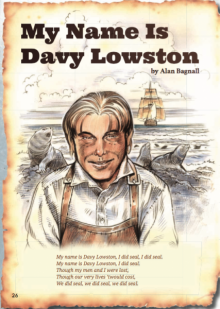 This text is a fictionalised recount. Davy Lowston was among a group of sealers set down on the Open Bay Islands (off the west coast of the South Island) in 1810. The ship that was to pick them up sank in a storm, and the men were marooned for four years. Their story is the basis of one of the earliest folk songs in New Zealand.

Listen to the song of Davy Lowston: