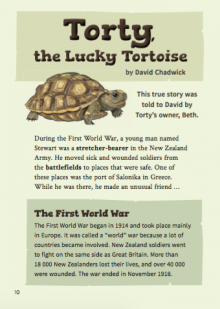 The adventures of Torty, the tortoise started in Greece during the First World War when she was rescued by Stewart, a New Zealand stretcher-bearer. Stewart took Torty back home to New Zealand at the end of the war and looked after her until he died. Torty is still alive and is cared for by Stewart’s family. This true story is told through a variety of text forms including two pages of graphic layout.