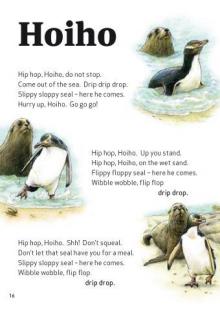 Hoiho (a yellow-eyed penguin) is being pursued by a seal, and in this dramatic poem, the writer urges Hoiho to move fast and escape. Neither creature can move as well on land as they can in the water, and the descriptive, dramatic language, with frequent repetition of similar sounds, conveys a vivid image of the desperate “Wibble wobble, flip flop” pursuit. This example of a native bird in danger provides a thematic link to “Catching Mustelids” in the same Journal.