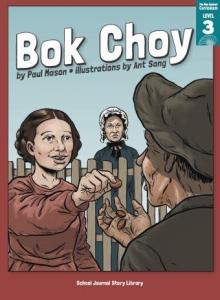 This seemingly simple historical story carries an important message about discrimination. It is set in a goldmining town in Otago during the 1860s gold rush. Jacob’s mother is glad to buy bok choy (Chinese cabbage) from Ah Sum, but Ah Sum’s presence brings out the worst in their neighbour Mrs Bishop and her son, William. William taunts Ah Sum and leaves Jacob feeling confused about his loyalties. When Jacob slips into the river while fishing, it is Ah Sum who rescues him. The story shows how Jacob becomes aware of the realities of Ah Sum’s life. The ending is left open for readers to infer the longterm impact of Jacob’s encounter with Ah Sum.